The students woke up fairly early today and in addition to getting ready for the closing day of the program, we all had to pack up and check out of our rooms before heading into to Manhattan.  Everyone was eager to get to the United Nations on this last day of the program.  The final resolutions were to be presented and voted on, with the resolutions receiving the majority of votes, being passed on to the United Nations for consideration. 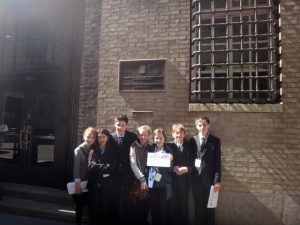 On our way over to the United Nations, we walked by the Egyptian Embassy and stopped for a quick photo. 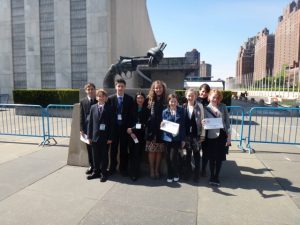 As we approached the United Nations building, we could see the parents of the North Star students waiting for us at the entrance.  We had invited parents to attend the Closing Ceremonies and enthusiastically, they accepted.  This also marked the first time in just under a week that the students had seen their parents.  Hugs and joyful greetings were a little rushed as the line to pass through security was growing quickly.  Once on the other side, we had a short time to ‘catch up’ and browse through the amazing UN gift & book shop. 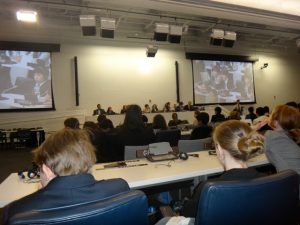 Initially, the voting and Closing Ceremonies was to be held in the General Assembly, however, due to an emergency meeting of the UN, the MMUN group was divided into two and voting would take place in two separate rooms within the United Nations compound.  This was disappointing in that now we would not hear all of the various committees final resolutions but everyone understood the importance of the work of the UN and therefore graciously adapted to the change. 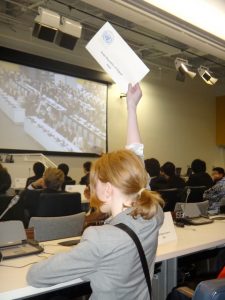 Shortened versions of the resolutions were read and voted on by all members of each committee.  Some passed, some did not.  Our students experienced what it was like to be onside with both the majority and the minority of voters.  Whichever side each student was on, they all showed strong engagement in the process and as a result could clearly articulate the pros and cons of the results- passionately!  The closing remarks highlighted the success of the program, and inspired students to continue to be engaged in the world around them, empowered them to have the courage to make change and to become the ‘future’ leaders- NOW!

The Committee on the Rights of the Child was highly commended for working together so successfully and for the first time in the program’s history, coming up with one, unanimously agreed upon resolution (The significance is that approximately 50 children who came to the program with the same number of different positions on a single topic, collaborated and compromised over a day and a half to come to one unanimously agreed upon resolution with minimal adult intervention). 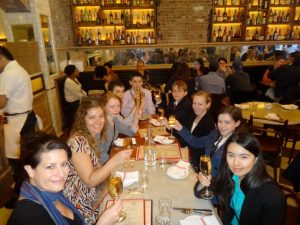 We said goodbye to the parents and made plans to meet back at the hotel after the groups final lunch together.  We headed to a nice Italian restaurant where we ate gourmet pizza and shared a celebratory champaign flute of ginger ale and toasted the diligent work, dedication, and overall success of the student’s efforts.  This truly was a life-changing experience for everyone involved!