We had a bit of a sleep-in and relaxing morning, taking our time to get dressed up in our formal attire for the Opening Ceremonies of the Montessori Model United Nations program.  The Opening Ceremonies were being held at the United Nations in the General Assembly and we were all looking forward to having the special privilege of being in a room where so many important decisions are made for the world.

We all met in the hallway outside of our rooms at the hotel.  I was taken aback by how mature the students looked in their suits and from the way they were carrying themselves, I could tell that they too felt a new level of maturity.  We headed into Manhattan on the Subway with one of the students taking on the responsibility  of navigating our way through the system. 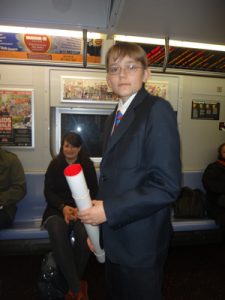 Our first stop of the day was visiting the ‘Top of the Rock’ view area at the Rockefeller building.  Amazing views!

We walked through Time Square and I enjoyed walking at the back of the group watching people do double-takes as our sharp-dressed students passed by.  We had a nice lunch at the Brooklyn Diner where the students confirmed the restaurant’s claim of having the best macaroni & cheese in NYC.  After lunch we went to the United Nations. 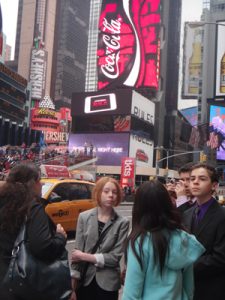 There was quite a security check, similar to that in airports, and after passing through it, we headed into the United Nations building and up to the General Assembly.  As we arrived early, we were able to be seated in the actual spots that the Egyptian delegates would be seated in.  As the General Assembly filled with students, the excitement and buzz of student’s moving throughout the room engaging one another, already seeking out ‘countries’ whose solutions to the issues to be discussed in the coming days, were in alignment with their own, was increasing by the minute. 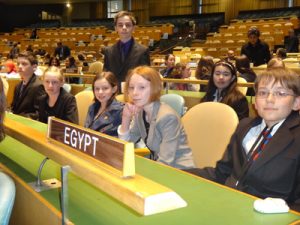 The Opening Ceremonies themselves were short, yet inspiring.  There were several speakers who all had similar messages for the students- that this was serious work and that anyone and everyone, including the students, has the power to affect change for the betterment of humanity.  We were also told that due to a previous group of students (not associated with the Montessori community) damaging the property in the General Assembly, that the UN was considering not allowing students in the General Assembly in the future.  The North Star students were very surprised that people were not respectful of such an important place. 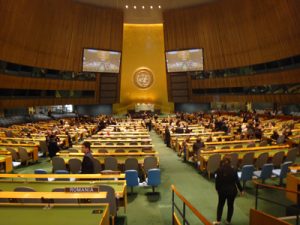 We caught the Subway back to Brooklyn from Grand Central Station and happily, everyone changed out of their dress clothes and fancy footwear.  After a full-day of walking, there were some sore feet (mine included) but everyone managed through it with little complaint. 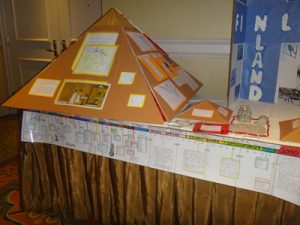 A few of the students set up our display about Egypt for the conference starting the next day and then we all went to sleep.  Reflecting before bed, Erin and I noted that the students were really being supportive of one another and representing North Star in a very positive way.  We were looking forward to seeing how their hard work and dedication to their goals would manifest itself at the following days sessions.