Erin and I took the students to their assigned rooms for the various committees they were sitting on.  From this point forward, teachers and parents were meant to be observers only and aside from some volunteers who help relay written messages between students, the only adult working directly with the students was the President of each committee, whose role was to facilitate the process.

I was profoundly impressed by many of the things I saw and heard while observing the proceedings.  In some committees, resolutions were beginning to take shape before the afternoon session even began…remarkable since before today, these students were strangers to each other.  These students, who are not clouded by political or prejudicial opinion, but rather speak from heart to heart in the best interest of all people, worked respectfully and collaboratively with other students from around the world, overcoming language and cultural barriers, to resolve current world issues. 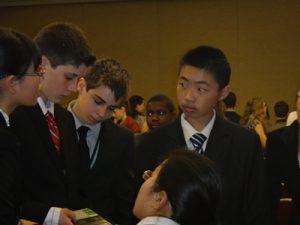 The students, participated in both moderated and open caucus sesisons and many said their speeches during the first part of the day.  It certainly didn’t take them long to get into the swing of how things worked and by the end of the day, our North Star students had even begun drafting resolutions and working to gain momentum and support from ‘other countries’.

Listening to the conversations over lunch and during dinner, it is already obvious that the experience has been a positive one for them.  They worked through their own fear, anxiety and emotions, around working in larger groups, public speaking, etc, and triumphed! 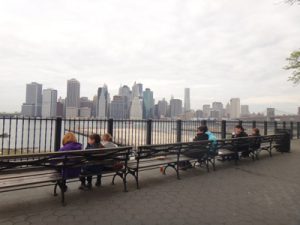