After a seemingly longer day of school than usual, the Montessori Model United Nations (MMUN) group from North Star Montessori, made up of seven year 6 & 7 students, myself (Head of School) and Erin (Classroom teacher) met at the Vancouver International Airport.  Parents, some expressing excitement and some showing signs of nervousness of their children going off to one of the world’s largest cities without them, said their goodbyes at the entrance to the security check point.  There was no turning back now and the excitement was palpable.

After spending at least eight years with these students at North Star, and knowing through the many diverse experiences at school that they were all independent, capable, responsible and respectful individuals who were well versed in what to do should they become lost, hurt, or should a stranger approach them,  Erin and I allowed them to make the trek in pairs from our gate to the shopping area to buy any last minute drinks or snacks for the plane.

Before too long we were boarding the plane and settling into our seats for the trek from Vancouver to JFK Airport.  Some slept periodically (note the appropriately themed eye covers donated to the group by one of the students in the picture below), some watched movies and some read & did some drawing.  One of the students wasn’t feeling so well and the Cathay Pacific flight crew were incredibly supportive and helpful. 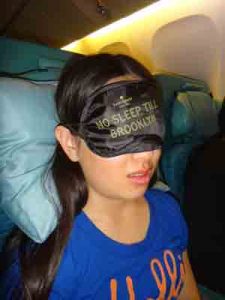 We arrived in New York at about 7:30am and there was no doubt that we were all a little tired and only managing to keep moving out of necessity and  excitement.  One student and I took a taxi (the others travelled by train) into Brooklyn Heights to our hotel and checked-in so that when the rest of the group arrived, we could rest a little before venturing out into the Big Apple.

Around 1pm we were somewhat refreshed and decided to check off the first of four items on the student’s ‘To Do’ List for that day.  A couple of blocks from our hotel was the Brooklyn Bridge and the first order of business was to walk across it into Manhattan.  Given the time of day the bridge wasn’t too crowded, but it was windy.  We were able to take our time, taking in the views of the Statue of Liberty and the Manhattan skyline and browsing through the various local artists’ displays along the way. 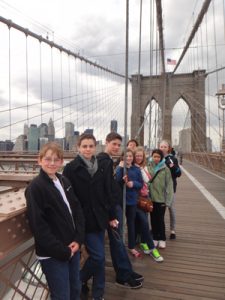 After some delicious New York City pizza slices and a stroll through central park (items 2 & 3 on the ‘To Do’ list for the day), we visited FAO Schwarz (#3).  For those of you who do not know what this is- it is a gigantic toy store in Manhattan with one of the largest selections of candy, toys and books for all ages, that I have ever seen.  In addition, random super-heros can be spotted here and there throughout your visit.  We followed up day of walking and exploring with a nice dinner out and quick subway ride back to the hotel.  By this point we had all reached the point of exhaustion where everything seems funny.  We (the students and teachers) giggled ourselves to sleep before too long and there was no question that we would sleep well and be ready for the Opening Ceremonies at the United Nations the following day. 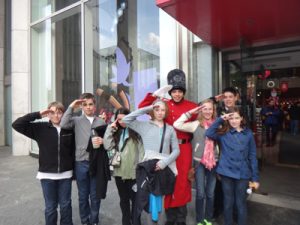