The telling of great stories is an integral part of the Montessori Elementary curriculum.  Successive stories are told which answer questions of how the universe was formed, how life developed on earth, and how humans evolved and developed into civilizations. Children of this age are curious about the world and are eager to answer these big questions and to make sense of their place within the universe and within history.

We always start the beginning of each year with the very first story of how the universe was created.  This story is by far the most detailed and elaborate of all the great stories.   We tell the story in order to give a broad overview and present them with the big picture of the entirety of which they are a part of.  The story is meant to leave an impression in their minds, which will hopefully generate more questions and curiosity to know more details.   We later go into more specific details of concepts through small group lessons.

The story of the universe includes several demonstrations and experiments which introduce concepts such as laws of attraction, the states of matter and their properties, melting points, expansion and contraction and the water cycle.  The overall theme focuses on the laws of the universe and how everything within it fulfills its own specific cosmic task.  This idea of how everything in existence has important roles to play to keep the universe and life on earth in order and balance is the foundation of the Montessori Elementary curriculum.

Once children see how all things are connected and how they, as humans, play an important role in that interconnectedness, they can begin to gain a sense of appreciation and to take ownership for the care of the world that they are a part of. 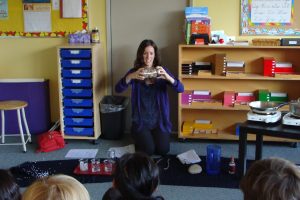