This morning the ECOFIN Committee voted on the two draft resolutions to determine if they would move forward for the final vote taking place at the United Nations in the General Assembly tomorrow.  After an hour of some interesting and respectful moderated discussion around the sticking point between the two different draft resolutions- interest rates on the Micro-Finance loans- it was decided that summaries of both resolutions would be presented at the UN tomorrow. 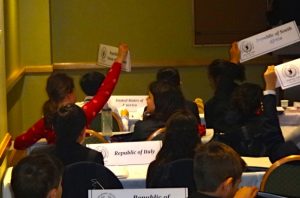 Eager to move onto the next topic, delegates quickly motioned to open the speakers list on Sport for Development.  Again, Myanmar was midway through the list.  Sydney’s speech was also very well executed with an effective pace and clearly enunciated words.  Like Olivia, some ideas and solutions communicated in her speech were included in the draft resolution to be voted on tomorrow at the United Nations in the General Assembly.  Unfortunately, the lights at the front of the room were off today, so it was difficult to take clear photos of the speakers.  We did manage to get some video of both North Star students speaking and these will be shared internally at the school with their classmates and families.  Sport for Development was resolved more quickly and agreed upon by the delegates.  By the end of the afternoon session the draft resolution was in place. 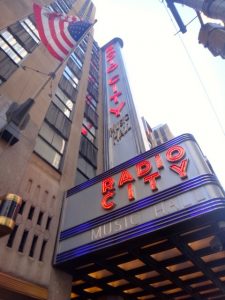 Following the afternoon session, we had a quick dinner at the hotel and got ready for a special night out on the town.  We were lucky enough to attend the Spring Spectacular at Radio City Music Hall.  Wowed by the overall performance of the actors and dancers, and the elegance of the world famous Rockettes, we had an excellent time.  After 80 years of the Rockettes performing their famous kick-line, it is still an awe-inspiring sight.  We all felt it was a real treat to have this experience. 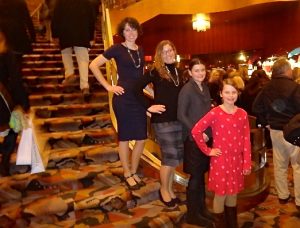 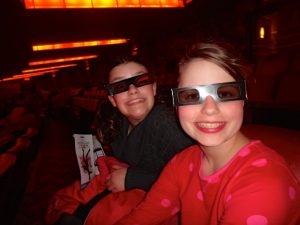