Today was the first day the various committees met.  Sydney and Olivia were representing Myanmar on the ECOFIN committee.  Each committee had two topics to study and prepare a position paper and speech for.  The delegates wasted no time in making a motion to have Micro-finance as the first topic of discussion.  This meant that, although both delegates from each country would participate, the delegate specifically assigned to that committee would have the opportunity to say their speech and had the final deciding vote for their country. 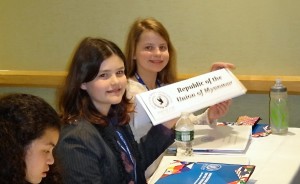 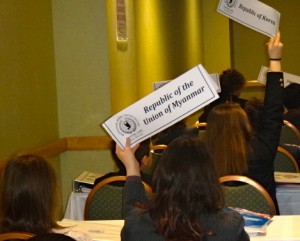 The allotted time for each speech was voted on by all of the delegates and the final time permitted was one minute and thirty seconds.  Thankfully, the night before when the girls were practicing and fine-tuning their public speaking skills, Olivia had identified items she could eliminate should the speaking time be voted in at under two minutes.  Myanmar was listed midway through the speakers list.  Many speakers were nervous and excited to say their speech and the audience was courteous and respectful of all speakers.  Olivia’s speech was very well executed and identified some key elements that were in line with several other countries and that had points which were integrated into the draft resolution. 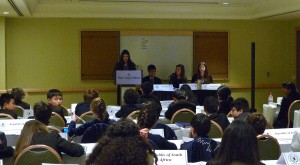 The afternoon session was made up of several moderated and unmoderated caucuses to try to bring about one resolution that all countries could agree upon for the final vote.  By the end of the day, there were two draft resolutions created on the first topic that will be voted on first thing tomorrow morning before moving onto the second topic:  Sport for Development. 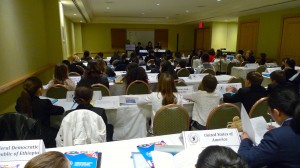 We headed out to Times Square to grab a take out pizza from a restaurant the girls chose.  After dinner and some down-time, we all headed downstairs in the hotel to the cultural evening.  Students from various schools around the world participated and there was everything from Texas Line-Dancing to traditional dances and performances from African, South American and Asian countries.  Due to a last minute room change in the hotel for the event, the organization of the performers was a challenge and we did not have a clear line of sight to enjoy the show fully.  We did enjoy what we could see and it was wonderful just to see some of the traditional regalia.  The event ran longer than expected and we decided to leave a little early to ensure we all got a good night’s rest to be ready for tomorrow.