We woke up early this morning and headed off for a full day of adventuring.  Today was our first New York Subway ride!  In the spirit of orienting ourselves to the underground transit world, we graciously accepted our right track-wrong train choice, switched trains and made our way to the Museum of Natural History. 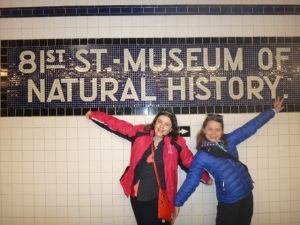 WOW!!!!!!  Sydney and Olivia decided that we would start on the top floor and work our way down.  Very quickly we realized that there would be no way we could see the entire the museum if we carefully read through all of the information as we went.  Taking a good look at the map, we roughed out which areas we would skim through and which areas we would spend more time in.  Even with this plan however, we could still have taken several days to go through the museum, as those things which may not have seemed interesting on a two dimensional map, were brought to life and hard to resist looking at, when we saw them in front of us. 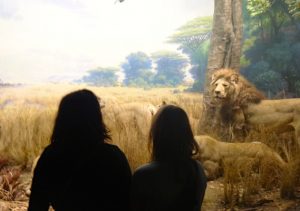 From dinosaurs, primates, African mammals and North American birds to Plains Indians, Pacific peoples, North American animals, human origins, meteorites and minerals, we gave it our best to take in as much as we could in five and a half hours. 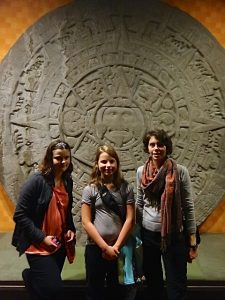 An added bonus was being able to spend some time in one of several special exhibits hosted by the museum at the time.  The students chose the Butterfly Conservatory.  This seasonal exhibit was made up of the large group of insects known as the ‘Order Lepidoptera’ and had three of the five Families of butterflies represented. 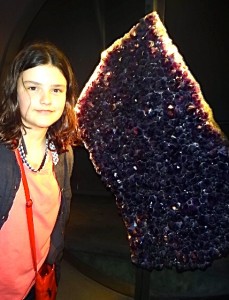 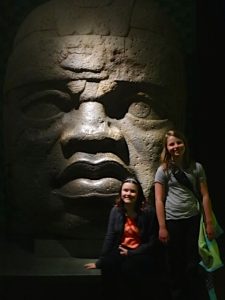 We successfully navigated our way back to the hotel via the Subway and had some time to rest and prepare for dinner and an Off-Broadway show.  We arrived a little early for the show so we had some time to try on some funny glasses at a little shop beside the theatre.  The Off- Broadway show we went to is called, STOMP.  STOMP has been playing at the Orpheum Theatre in New York since 1994 and has won many awards over the years.  Typically on a graduation trip, the students would choose and plan out all of events and places to dine, however, with only two girls we divided up some tasks between teachers and students to avoid overwhelming them.  They were not quite sure what to expect from the performance.  Katy and I were thrilled to watch them enthusiastically enjoying the show, participating where appropriate and laughing at the funny bits.  Comments I overheard were, “That was the best thing I have every seen”, and “That was amazing!”  To top it off, the girls got to thank some cast members and have their picture taken with them! 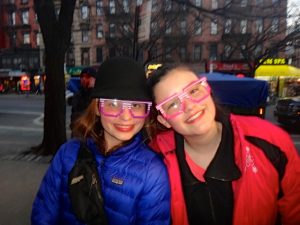 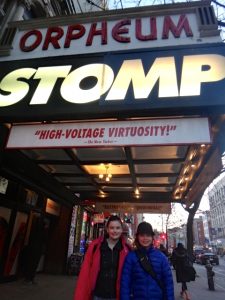 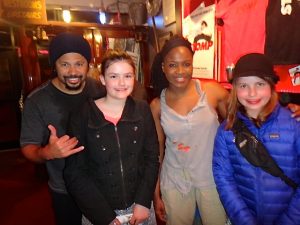